(To hear the podcast episode with Brent, click this link. Also, this article contains affiliate links.)

It has been rumored that Johnny Depp has been seen on the Delmarva Peninsula.

The fact is, at the time of this article and podcast episode, Mr. Depp is rather busy with a defamation lawsuit against his ex-wife, Amber Heard. Given the vast amounts of coverage of this trial we won’t delve into the details of the “she said,” “he did” drama. But, we will visit what were likely easier days in the life of Depp, at least as much as it involves Delmarva.

There are several places we might see celebrities on Delmarva, but if there’s any locality where it might happen on a somewhat regular basis, it’s likely St. Michaels. Delmarva is dotted with dozens of small, coastal towns and St. Michaels is one of them. In fact, St. Michaels sits on a smaller peninsula on the Delmarva peninsula, so it’s pretty much surrounded on water on all sides. In addition to being small, it’s somewhat secluded and lacks the hype, glitz, and youthful summer energy of vacation spots like Ocean City, MD. From a celebrity sighting standpoint, it might be better to compare it to Nashville than it would be to Hollywood. Celebrities visit there often, but the locals know what makes St. Michaels special is the privacy bestowed upon the visitors to the area. So, if in fact Johnny Depp was sighted, you can be sure he was sighted without being photographed. And if someone spoke to him, it was to ask if he was enjoying his day, not if he’d provide an autograph. St. Michaels knows how to treat its celebs – with hospitality and from a distance.

The fact is, Hollywood is no stranger to the Delmarva Region. Far from it. We locals like to spin stories about how we experience Hollywood each time it comes calling. Perhaps I should say we tell stories, which is different from spinning a story. But as exciting stories go, we find there’s a certain amount of “spin” which occurs.

There are the easy stories to remember and tell, like the time Julia Roberts and Richard Gere came to film Runaway Bride which turned Berlin, MD into the fictional town of “Hale, MD.” Just a few years later Berlin was the setting for another feature film, Tuck Everlasting in which the town portrayed the 19th century village of “Treegap.”

Then there are the movie stars that called Delmarva home. Actors Linda Hamilton (The Terminator series, Beauty and the Beast) and Linda Harrison (Planet of the Ape, 1968) both hail from the lower Eastern Shore, Hamilton from Salisbury, Harrison from Berlin.

The stories film go on and on, and author Brent Lewis wanted to tell us all about it. He begins his work where you might think he would – at the beginning of the story. In this case, he takes us back to the first scene filmed on the Delmarva, a train wreck in the Silent Film, The Whip. You can watch that scene in the youtube video linked below.

In Stardust by the Bushel: Hollywood on the Chesapeake Bay’s Eastern Shore (Secant Publishing 2021, Salisbury, MD), Author Brent Lewis provides all the background we could ever wish for about movie making on Delmarva. There’s the low-hanging fruit – some of the obvious favorites – such as Dead Poets Society (Middletown, DE), The Runaway Bride (Berlin, MD), Failure to Launch (Oxford, MD), and Wedding Crashers (St. Michaels). There’s the home-grown celebrities from Annie Oakley, to Golden Girls Bea Arthur (Cambridge, MD), to Parks and Rec star Aubrey Plaza (Wilmington, DE) among others. His exhaustive research tells us the stories of how Berlin, MD’s own Linda Harrison came to be the heroine of 1968’s Planet of the Apes alongside Charleton Heston. He recounts the long and prosperous career of Salisbury’s own Linda Hamilton, of Terminator fame. He informs us of the previously unknown silent films which will never be seen again due to fire. He introduces us to a traveling riverboat theater, and provides honest yet appropriately respectful accounts of sometimes controversial local Hollywood Stars Tallulah Bankhead and Robert Mitchum. We learn that Neil Patrick Harris got his start in Hollywood when he starred alongside Whoopie Goldberg in Clara’s Heart (Easton and St. Michaels, MD). Aided by the fact that it was written by somebody with deep roots on the Eastern Shore, Stardust by the Bushel provides us with insights you’ll not find elsewhere.

Lewis was born and raised on the Eastern Shore of Maryland and grew up in the Kent Narrows area. With a documented family lineage tracing its local roots back 10 generations, his mother’s family came to Delmarva with the earliest European settlers in the 1640’s. It doesn’t get much more “from here” than that. His mother’s ancestors were war heroes, judges, and negotiators with the local Native American tribes. His father’s side of the family has been here almost as long and were watermen (that’s fishermen, for people unfamiliar with the term) and farmers. And, to hear Lewis talk about his ancestors, we begin to understand where he gets his penchant for writing and storytelling.

With a deep appreciation for local history, Lewis ran Kent Island Heritage Society’s oral history for about 10 years, so he’s interviewed “scores” of Kent Islanders. In that process, he learned a lot about the various perspectives of storytelling, and the ins and outs of how to get people to warm up through the interview process. Over the years he developed a second sense about when to keep the recorder running during an interview, and when to turn it off for the deeper, more meaningful information a subject had but might not want recorded on tape. Being a local with deep roots, interview subjects trusted him to handle their stories appropriately.

Eventually, Brent found he had enough material for a book. His first book, Remembering Kent Island, Stories from the Chesapeake was published in 2009. Not long after, when he was still with the Kent Island Heritage Society, History Press Publishing came to Lewis soliciting ideas for books about the region. At the time he was documenting the memories of the last living charter member of the Kent Island Volunteer Fire Department. Having found the conversation enjoyable and informative, he thought it might be worth digging deeper for a broader history, and that others might be interested in knowing what he learned. So, this was the book he pitched to History Press. They accepted his pitch and A History of the Kent Island Volunteer Fire Department was published in 2010.

Not one to limit his creative output, Lewis delved into the world of fiction and wrote Blood Point 1976 (published, 2015). This not-for-kids story is about an Eastern Shore waterman hired to retrieve the wayward daughter of a local bigshot from the rough district of Baltimore. According to Lewis, the story was sitting in his head begging to get out, and it was a project he had to complete before moving back into the people’s history of the Eastern Shore and bringing us Stardust by the Bushel.

Lewis’s books are available wherever you buy books, including local indie bookstores like Secant Publishers. You can find his blog at www.easternshorebrent.com, where he provides some of the stories that help him develop his books and often includes pictures we might not see elsewhere. 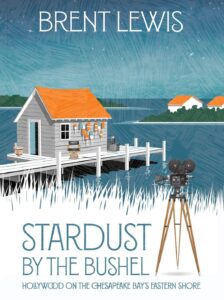 For a chance to win an autographed copy of Stardust by the Bushel, listen to the Brent Lewis episode of the Delmarva’s Own podcast by clicking on the blue or purple text in this sentence.